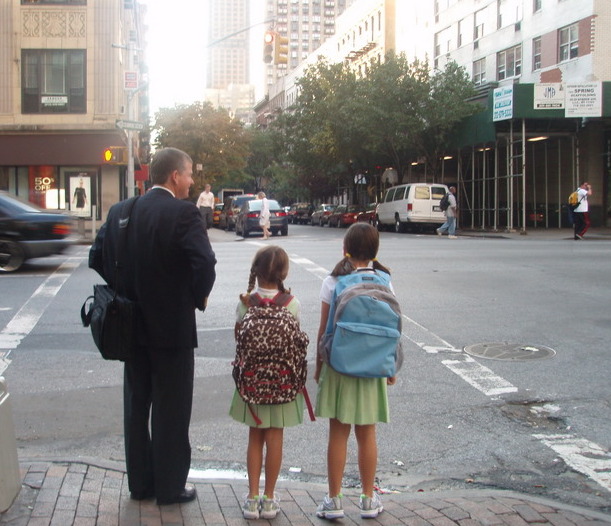 I have lived on the island of Manhattan twice. The first time was in 2001 and the kids were toddlers. My then-husband had a wonderful job opportunity up there and we, starry-eyed and thirsty for an adventure, decided to go for it. The second time we lived there was four years later – same husband, same job but now the kids were eight and ten and we knew what we were doing. However, there are both costs and promises when moving to a city that crams several million people onto an island that measures just over two miles in width.

Finding an apartment is Manhattan can be harder to secure than it might sound. The recommended procedure if you have kids is to find their school first. Like many families, we opted to live on the Upper East Side and within walking distance of our girls’ school. In addition to finding a place you can actually envision living in, you must deal with the ever-present reality of sticker shock. New York never disappoints in this arena. The apartment we rented was less than half the size of our house in Charlotte and we had the privilege of paying more than three times in rent than was our mortgage. Welcome to New York.

One of the greatest things about living in New York is that it’s incredibly convenient…everything at your fingertips and a delivery option for everything else. Within any given 4-5 block radius of your apartment, you can likely find a drug store, a Starbucks, a diner, a nail salon, an ATM, a bodega (think local, mom & pop 7-11 with fresh cut flowers out front) and any number of obscure ethnic restaurants. You may not know that Manhattan even has several Bed, Bath & Beyond stores, a Home Depot and a relatively new Costco in Harlem. (While bulk shopping seems contraindicative to living in a tiny apartment, Manhattanites demand all options.)

Having lived there twice I can tell you that the honeymoon stage lasts approximately three weeks. The energy and excitement that lures one there and keeps you afloat will subtly begin to take over your physical body and chip away at your psyche. Living in Manhattan is intoxicating, much like being in love. But as reality surfaces, the glitz and glamour start to fade. The noise, the crowds, the rushing here and there, dodging rain and all varieties of hostility…the sensory overload can be intense. Suddenly you begin to wonder what you were thinking moving to the Big Apple in the first place – or in my case, the insanity of being back again by choice.

A writer for The New York Times characterized the city best when he wrote, “The duality of life in New York City usually comes down to its intense visceral pleasures versus the agonies of getting at them.” That said I wouldn’t trade my two “tours of duty” there for anything on earth. It was a time of profound growth on so many levels and an experience that feeds me to this day. Thankfully I get to go back often and I’m eternally grateful for that. I can honestly say that I still dearly love New York, warts and all. But clearly I can’t live there. Or can I?