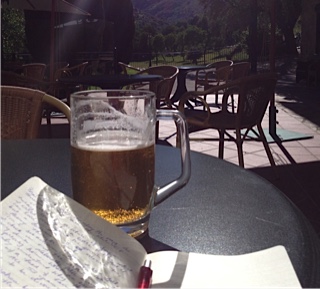 Like many pilgrims setting out to walk the Camino, I brought along a journal. No stranger to recording thoughts and feelings – I’d been doing it semi-regularly since college – I found the practice both soothing and necessary. The experience felt so rich I was afraid to miss a thing, and I had the idea that writing about it would keep it alive for me. So each afternoon, and sometimes the following morning, I’d write about my day. The people I’d met, the stories I’d heard, the condition of my feet, the details of the different villages, and the songs I was singing and humming on my walk.

One song that kept recurring, dreamlike, was by one of my favorite artists, Sarah McLachlan. Interestingly, I barely knew the song that came to me. It literally appeared in my throat one day while I was walking and started singing itself. I thought I might know the tune or the artist but I couldn’t be sure. I later searched my IPod and found it. It’s called “Answer.”

“If it takes my whole life…I won’t break, I won’t bend…It’ll all be worth it…Worth it in the end.”

It was after a few days of walking that I found myself singing and humming for long stretches of time. It would happen spontaneously when I was alone and typically when other pilgrims were out of earshot. (I was certainly not giving concerts, and I’m no singer.) This was not a common habit of mine before walking or since, but it was a big part of my path.

Every time I hear “Answer” now I am transported. And often overcome with tears. Seeing Sarah McLachlan perform this song live in a concert last summer was almost too much to handle. And being one of her more obscure songs, I was over the moon that she played it. By incredible serendipity, I bumped into her on the streets of NYC the following day and was able to tell her how meaningful the song was to me. (And shamelessly snag a photo with her.)

Another song that became anthem-like for me was “Blackbird” by The Beatles. I had no particular affinity for the song or the band until I walked the Camino, and now when I hear it I can again feel the earth below my feet and smell the dirt and gravel that gets kicked up…taking me back to a particular stretch of the Camino.

“Blackbird singing in the dead of night…Take these broken wings and learn to fly…All your life…You were only waiting for this moment to arise.”

These songs, and others, were my companions along the way. I didn’t turn to them out of fear or angst, they would often just appear. They became mantras of sorts, with no real personal meaning before walking the Camino. And now they live on as little sonnet treasures of mine.

One my final day of walking (day 14), I was really dragging my feet leaving the hotel. I could scarcely believe that the big adventure was coming to an end and I wasn’t near ready for it. I had never known such a sustained sense of contentment before, and wasn’t all that interested in returning to “real life.” It was approaching noon when I finally left. (An unthinkable start time along the Camino.)

I walked in complete solitude. Leaving as late as I did, there were hardly any other pilgrims on the path. And that’s just how I wanted it. I needed the long goodbye to be all my own.

I made it to Santiago late that afternoon, and a festive reunion with many people I’d met along the way ensued. Bumping into people I hadn’t seen for days, and witnessing others do the same was truly thrilling. Completing hundreds of miles to get there, and being in the company of those who’d done the same, created a certain electricity among us. (That and the free flow of red wine.)

The following morning I left Santiago and flew back to Madrid. Already in a puddle to say farewell to the greatest adventure of my life, the chorus from the pseudo-rap/mashup song “I’ll Be Missing You” was playing on the radio in my cab ride to the airport. I lost it.

Back in my cushy hotel in Madrid and after a loooooong foot soak in my tub, I wrote the following about the song I’d heard earlier that day. From my journal entry on July 10th, 2012:

I began to cry – tears of joy, tears of melancholy, tears of remembrance, tears of wanting to keep the Camino alive.