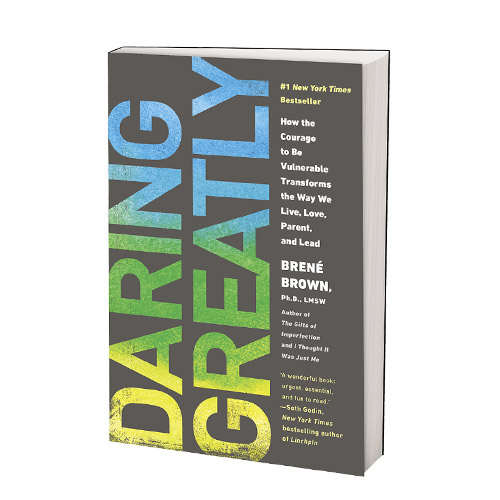 Brené Brown is an evangelist for courage, compassion and connection. She wants us “all in” – at home and at work – and tackles uncomfortable topics like vulnerability, shame and disengagement to that end.

The New York Times best seller,”Daring Greatly; How the Courage to Be Vulnerable Transforms the Way We Live, Love, Parent and Lead” was published in 2012 partly in response to her runaway success in the world of TED talks. That talk, “The Power of Vulnerability,” has been viewed by over 18 million people since 2010. It’s a 20-minute must-see. (Run, don’t walk.)

Defining vulnerability as uncertainty, risk and emotional exposure, Brown assures us that no one is immune (other than the sociopaths among us). The four myths of vulnerability she aims to dispel are:

I don’t do vulnerability: I’m opting out. I’m an engineer/lawyer/banker/fill-in-the-blank, and we aren’t vulnerable people.

Vulnerability is letting it all hang out: It’s TMI, it’s over-disclosing (vs. mutual sharing) resulting in a “vulnerability hangover.”

We can go it alone: We over-romanticize hyper independence, and are, in fact, built for connection. The concepts of rugged individualism and “never let ‘em see you sweat” are illusory.

Moving on to the taboo topic of shame, Brown defines it as the intensely painful feeling or experience of believing that we are flawed and therefore unworthy of love and belonging. She says we all have it, no one wants to talk about it, and that the less we talk about it the more we have it and the more it grows. She reminds us that shame resilience is a prerequisite for vulnerability, and that there is no intimacy in relationships without vulnerability.

Distinguishing between embarrassment, guilt, humiliation and shame, the net takeaway is: Guilt = I did something bad. Shame = I am bad. And because shame is highly correlated with addiction, violence, aggression, depression, eating disorders and bullying, she wants us speaking shame (shame hates having words wrapped around it) and owning our stories.

Quoting Carl Jung, she encourages us to author our own future:

“I am not what has happened to me. I am what I choose to become.”

She argues that disengagement is the main culprit for many problems, and she posits that “we disengage to protect ourselves from vulnerability, shame, and feeling lost and without purpose We also disengage when we feel like the people who are leading us – our boss, our teachers, our principal, our clergy, our parents, our politicians – aren’t living up to their end of the social contract.”

Her charge is that we must re-humanize the workplace and eliminate shame and blame as management styles. Taking on the topics of giving feedback and the myriad leadership roles we play, she created the Engaged Feedback Checklist and the Leadership Manifesto. Both excellent.

Plunging into the dicey arena of parenthood, she believes the often-flung labels of “good parent” or “bad parent” are not only corrosive, but also missing the mark. She says the true metric is realized by simply asking:

Are you paying attention?

Brown offers us the meaty Wholehearted Parenting Manifesto in her book with empowering directives to our children such as, “I want you to engage with the world from a place of worthiness” and “You will learn accountability and respect by watching me make mistakes and make amends, and by watching how I ask for what I need and talk about how I feel.”

Her book opens and concludes with a section of Theodore Roosevelt’s 1910 speech “Citizenship in a Republic,” part of which follows here:

“It is not the critic who counts; not the man who points out how the strong man stumbles, or where the doer of deeds could have done them better. The credit belongs to the man who is actually in the arena, whose face is marred by dust and sweat and blood; who strives valiantly; . . . who at the best knows in the end the triumph of high achievement, and who at the worst, if he fails, at least fails while daring greatly…”

Brown assures the reader, over and over, that daring greatly is not about winning or losing – it’s about courage. “We love seeing raw truth and openness in other people, but we’re afraid to let them see it in us,” says Brown. To be fully engaged in our lives, that’s gotta change.