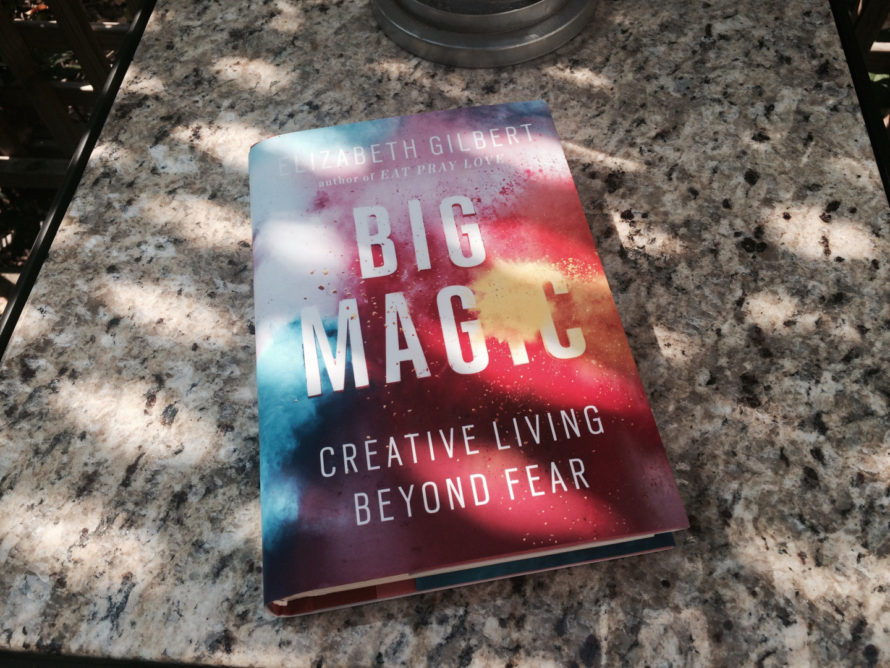 In Elizabeth Gilbert’s latest undertaking, Big Magic: Creative Living Beyond Fear, she jumps right in with the big question on which she believes all creative living hinges: “Do you have the courage to bring forth the treasures that are hidden within you?”

Introducing the essential ingredients for creating big magic in our lives – courage, enchantment, permission, persistence, trust and divinity – she weaves a series of personal stories with the same wisdom, humor and irreverence we came to know in her smash hit Eat, Pray, Love.

She encourages us to live a life driven more by curiosity than fear and proceeds to list almost 30 ways in which we might be afraid to live a more creative life. Some particularly resonant with this reader were:

You’re afraid you’ll be rejected or criticized or ridiculed or misunderstood or – worst of all – ignored.

You’re afraid somebody else already did it better.

You’re afraid of being exposed as a hack, or a fool, or a dilettante, or a narcissist.

Gilbert tells the remarkable story of starting a novel that was dear to her, but eventually “left” her due to neglect. And not only did she lose the momentum for the story, it took up residence with another author who eventually published it. It is a stunning outcome and one she describes as a “curious miracle.”

“I don’t demand a translation of the unknown,” says Gilbert. Enchanting, yes?

Writing about the need to grant oneself permission slips to create and to live out loud, she directs us: “Follow your own fascinations, obsessions, and compulsions. Trust them. Create whatever causes a revolution in your heart.”

That one takes both courage and permission, to my way of thinking.

Gilbert talks about having taken vows as a teenager to become a writer. In a very purposeful ritual she “swore my fidelity to writing for the rest of my life.” Not most of us have such laser focus at 16, and she makes a point to say that it’s never too late to begin. She also writes about watching others “murder their creativity by demanding that their art pay the bills.” She warns us not to think of our creativity as a government job or a trust fund, and not to be too proud to take a “real job” to pay the bills.

Viewing perfectionism as a “high-end, haute couture version of fear” she admits that it often disguises itself as a virtue. “We must understand that the drive for perfection is a corrosive waste of time, because nothing is ever beyond criticism,” says Gilbert.

Trust the process and don’t treat your creative endeavors as poor, defenseless creatures, says Gilbert. She goes on to say:

“Your creative work is not your baby; if anything, you are its baby. Everything I have ever written has brought me into being. Every project has matured me in a different way. I am who I am today precisely because of what I have made and what it has made me into.”

Approaching her work from a place of “stubborn gladness,” Gilbert writes that her creativity is still the most effective way for her to access her soul’s sole desire: WONDER.

As an aside, Gilbert’s 2009 TED talk, “Your Elusive Creative Genius,” is a top-20 talk of all time (currently at 10 million views) and an excellent primer to this book.